Yellow Fever On The Rise

Yellow Fever On The Rise:

Is There A Cure?

How Do I Prevent It? 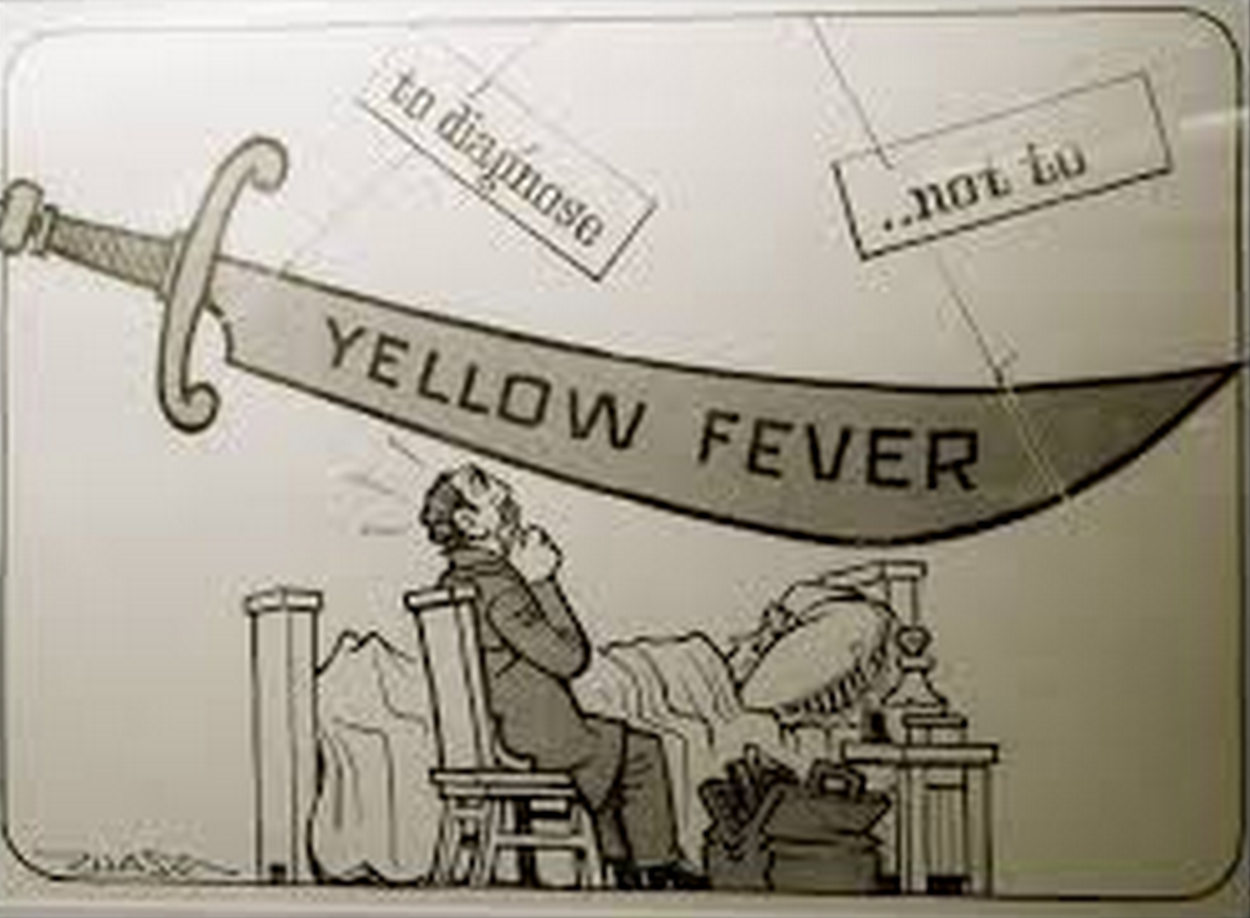 Yellow fever is caused by the yellow fever virus (YFV), also called Flavivirus. The virus is transmitted by female mosquitos, who pick it up from monkeys or other humans, then delivers it to a new human when they bite and suck blood. The disease cannot be spread from person to person.

CAUSES - IN DETAIL
Yellow fever is caused by a virus that is spread by the Aedes aegypti mosquito. These mosquitoes thrive in and near human habitations where they breed in even the cleanest water. Most cases of yellow fever occur in sub-Saharan Africa and tropical South America.

Humans and monkeys are most commonly infected with the yellow fever virus. Mosquitoes transmit the virus back and forth between monkeys, humans or both.

SYMPTOMS
During the first three to six days after you've contracted yellow fever — the incubation period — you won't experience any signs or symptoms. After this, the infection enters an acute phase and then, in some cases, a toxic phase that can be life-threatening.

Acute phase
Once the infection enters the acute phase, you may experience signs and symptoms including:


When to see a doctor Before travel
Four weeks or more before your trip, make an appointment to see your doctor if you're traveling to an area in which yellow fever is known to occur so that you discuss whether you need the yellow fever vaccine.

If you have less than four weeks to prepare, call your doctor anyway. Ideally, you'll be able to be vaccinated at least three to four weeks before traveling to an area where yellow fever occurs to give the vaccine time to work. Your doctor will help you determine whether you need vaccinations and can provide general guidance on protecting your health while abroad.


DEFINITIONS
Yellow fever is a viral infection spread by a particular type of mosquito. The infection is most common in areas of Africa and South America, affecting travelers to and residents of those areas.

In mild cases, yellow fever causes fever, headache, nausea and vomiting. But yellow fever can become more serious, causing heart, liver and kidney problems along with bleeding (hemorrhaging). Up to 50 percent of people with the more severe form of yellow fever die of the disease.

There's no specific treatment for yellow fever. But getting a yellow fever vaccine before traveling to an area in which the virus is known to exist can protect you from the disease.


RISK FACTORS
You may be at risk of the disease if you travel to an area where mosquitoes continue to carry the yellow fever virus. These areas include sub-Saharan Africa and tropical South America.

Even if there aren't current reports of infected humans in these areas, it doesn't mean you're risk-free. It's possible that local populations have been vaccinated and are protected from the disease, or that cases of yellow fever just haven't been detected and officially reported.

If you're planning on traveling to these areas, you can protect yourself by getting a yellow fever vaccine at least several weeks before traveling.

Anyone can be infected with the yellow fever virus, but older adults are at greater risk of getting seriously ill.

COMPLICATIONS
Yellow fever results in death for 20 to 50 percent of those who develop severe disease. Complications during the toxic phase of a yellow fever infection include kidney and liver failure, jaundice, delirium, and coma.

People who survive the infection recover gradually over a period of several weeks to months, usually without significant organ damage. During this time a person may experience fatigue and jaundice. Other complications include secondary bacterial infections, such as pneumonia or blood infections.

PREPARING FOR YOUR APPOINTMENT
Call your doctor if you've recently returned from travel abroad and develop mild symptoms similar to those that occur with yellow fever. If your symptoms are severe, go to an emergency room or call 911 or your local emergency number.

Here's some information to help you get ready, and know what to expect from your doctor.

Information to gather in advance

Symptom history. Write down any symptoms you've been experiencing and for how long.
Recent exposure to possible sources of infection. Be sure to describe international trips in detail, including the countries you visited and the dates, as well as any contact you may have had with mosquitoes.

Medical history. Make a list of your key medical information, including other conditions for which you're being treated and any medications, vitamins or supplements you're taking. Your doctor will also need to know your vaccination history.

Questions to ask your doctor. Write down your questions in advance so that you can make the most of your time with your doctor.

The list below suggests questions to raise with your doctor about yellow fever. Don't hesitate to ask more questions during your appointment.


Your doctor is likely to ask you a number of questions. Being ready to answer them may reserve time to go over any points you want to talk about in-depth. Your doctor may ask:

TESTS AND DIAGNOSIS
Diagnosing yellow fever based on signs and symptoms can be difficult because early in its course, the infection can be easily confused with malaria, typhoid, dengue fever and other viral hemorrhagic fevers.

To diagnose your condition, your doctor will likely:


TREATMENT AND DRUGS
No antiviral medications have proved helpful in treating yellow fever. As a result, treatment consists primarily of supportive care in a hospital. This includes providing fluids and oxygen, maintaining adequate blood pressure, replacing blood loss, providing dialysis for kidney failure, and treating any other infections that develop. Some people receive transfusions of plasma to replace blood proteins that improve clotting.

PREVENTION
A safe and highly effective vaccine prevents yellow fever. Yellow fever is known to be present in sub-Saharan Africa and parts of South America. If you live in one of these areas, talk to your doctor about whether you need the yellow fever vaccine. If you plan to travel in these areas, talk with your doctor at least 10 days, but preferably three to four weeks, before your trip begins. Some countries require travelers to present a valid certificate of immunization upon entry.

A single dose of the yellow fever vaccine provides protection for at least 10 years. Side effects are usually mild, lasting five to 10 days, and may include headaches, low-grade fevers, muscle pain, fatigue and soreness at the site of injection. More-significant reactions — such as developing a syndrome similar to actual yellow fever, inflammation of the brain (encephalitis) or death — can occur, most often in infants and older adults. The vaccine is considered safest for those between the ages of 9 months and 60 years.

Talk to your doctor about whether the yellow fever vaccine is appropriate if your child is younger than 9 months, if you have a weakened immune system (immunocompromised), or if you're older than 60 years.

To reduce your exposure to mosquitoes:

To ward off mosquitoes with repellent, use both of the following:

Nonskin repellent. Apply permethrin-containing mosquito repellent to your clothing, shoes, camping gear and bed netting. You can buy some articles of clothing and gear pre-treated with permethrin. Permethrin is not intended for use on your skin.

Skin repellent. Products with the active ingredients DEET, IR3535 or picaridin provide long-lasting skin protection. Choose the concentration based on the hours of protection you need. In general, higher concentrations last longer.

Keep in mind that chemical repellents can be toxic, and use only the amount needed for the time you'll be outdoors. Don't use DEET on the hands of young children or on infants under 2 months of age. Instead, cover your infant's stroller or playpen with mosquito netting when outside.

According to the Centers for Disease Control and Prevention, oil of lemon eucalyptus, a more natural product, offers the same protection as DEET when used in similar concentrations. But these products should not be used on children younger than age 3.


The Yellow Fever Vaccine: A History

After failed attempts at producing bacteria-based vaccines, the discovery of a viral agent causing yellow fever and its isolation in monkeys opened new avenues of research. Subsequent advances were the attenuation of the virus in mice and later in tissue culture; the creation of the seed lot system to avoid spontaneous mutations; the ability to produce the vaccine on a large scale in eggs; and the removal of dangerous contaminants. An important person in the story is Max Theiler, who was Professor of Epidemiology and Public Health at Yale from 1964-67, and whose work on virus attenuation created the modern vaccine and earned him the Nobel Prize.

DESCRIPTION
YF-VAX®, Yellow Fever Vaccine, for subcutaneous use, is prepared by culturing the 17D-204 strain of yellow fever virus in living avian leukosis virus-free (ALV-free) chicken embryos. The vaccine contains sorbitol and gelatin as a stabilizer, is lyophilized, and is hermetically sealed under nitrogen. No preservative is added. The vaccine must be reconstituted immediately before use with the sterile diluent provided (Sodium Chloride Injection USP – contains no preservative). YF-VAX vaccine is formulated to contain not less than 4.74 log10 plaque forming units (PFU) per 0.5 mL dose throughout the life of the product. YF-VAX vaccine is a slight pink-brown suspension after reconstitution.

Other Articles Of Interest:

Medical Breakthrough Or Is It Science Fiction
What Does The Future Hold - Predictions
Mountain Size Asteroid On Path With Earth Russian Scientist
Spinosaurus: The New Evidence.
European Parliament Vote To Break Up Google
Guy Jumps On Dead Whale
Can Eating These Seven Fish Harm You
Bird Rolls Off Car Only In Chicago

Other Videos Of Interest: