Nearly a year after a Dallas woman fell to her death from the Texas Giant roller coaster at Six Flags Over Texas in Arlington, the legal battle over liability in the accident is far from over. 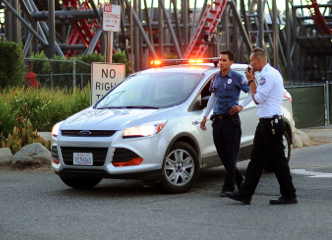 Rosa Esparza’s family wants to find out why the 52-year-old woman fell off the thrill ride. Lawyers for Gerstlauer Amusement Rides, the German company that designed the coaster’s train cars, is blaming Six Flags, while the amusement park company is pointing the finger back at the ridemaker.

Two months after the lawsuit was filed last September, all sides attempted to settle the case through mediation. It didn’t work, and thus began the court fight.

Lawyers will spend the next several weeks taking more depositions and translating documents from the company in preparation for a late January trial date. The family is seeking more than $1 million.

Branson said Esparza’s family continues to heal from their loss. “They’re doing the best they can,” he said, adding that they would not be talking to the media.

Esparza was thrown about 75 feet from the ride in the early evening of July 19, 2013, as her daughter and son-in-law sat in front of her. It was her first visit to the amusement park. The suit says Esparza was upside down in her seat and holding on for “dear life” before she fell to her death.

The Arlington Police Department and the park conducted investigations. Gerstlauer also sent a representative to investigate.

Following the accident, the ride was immediately shut down before reopening in September after Six Flags’ investigation found no mechanical failure was involved. Six Flags added redesigned restraint-bar pads provided by the manufacturer, as well as seat belts, and began providing a coaster seat at the ride’s entrance so guests can test whether they fit safely into the cars.

The family has sued Grand Prairie-based Six Flags Entertainment and three related entities, as well as Gerstlauer Amusement Rides, the 60-employee company based in Münsterhausen. Six Flags and Gerstlauer have also filed cross claims against each other.

Gerstlauer alleges that Six Flags employees failed to properly secure Esparza and to stop the ride when operators thought the restraint bar was not in its proper position. In addition to providing the test seat with a red light indicator, the company also provided seat belts that were not installed until after the accident.

Six Flags alleges the ride was defective and dangerous, and that it followed all the recommended operational and maintenance procedures as spelled out by Gerstlauer, even at the time of the accident.

© 2014 all rights reserved
Posted by Unknown