Transformers AOG brings in the Dinobots

Transformers AOG brings in the Dinobots

Like it or not, Transformers 4 made a ton of money this weekend. Although the final tally is still out, there’s a strong possibility that the flick crossed the $100 million mark during its first three days of release. 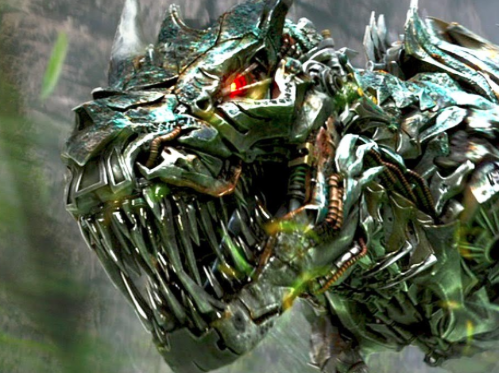 Despite a slew of negative reviews from critics and endless waves of hate from haters, director Michael Bay’s latest mega-budget Transformers flick proved once again that there’s a market for his unique brand of cinematic tomfoolery. Even if you often dream of crushing his skull with a digital film projector, you have to admit that the guy is a shrewd businessman. People obviously pay good money to watch his movies.

Since Transformers 4 is presently on-track to become one of the biggest hits of the summer movie season, what does this mean for Transformers 5? While some outlets believe that the next installment of the series will hit the big screen within the next few years, producer Lorenzo di Bonaventura told Screen Rant that the Age of Extinction follow-up doesn’t have a release date just yet.

“No, that’s not accurate. Somehow that gets reported, it’s made up by somebody and then everybody thinks it’s true. No, I think we’ve been doing these on different cycles. I think the same thing is going to happen this time. It’s an exhausting process to make these movies. The scale of them is so enormous. It really does tax everybody and our tendency is to finish one at a time, recover, and then begin talking. And we’ll do the same thing this time.”

Although you wouldn’t think that Michael Bay and Lorenzo di Bonaventura would care too much about reviews when Transformers 4 is making tons of money at the box office, the producer admitted to Screencrush that sometimes it’s difficult to read what the critics have to say about their work. After all, everyone enjoys getting good grades.

“Well, first of all, I think every filmmaker cares what critics think because, you know, you’re being judged. I think if someone says they don’t care, baloney. Does it affect the gross of the movie? Probably a little bit. But, I think the problem with critics and the big movies in general is they don’t understand the format. So, they’re judging ['Transformers 4'] against the kind of movie experience that it is not trying to do, nor should it.”

It’s apparent that negative reviews aren’t hurting Transformers 4 at all this weekend. Deadline believes the flick could end up making around $100 million when all is said and done, a number that would knock Captain America: The Winter Soldier out of the top spot for 2014. Are you surprised by the success Transformers: Age of Extinction has enjoyed this weekend? Did you catch the flick in theaters?