As the supplements suggest, 300: Rise of an Empire is not a straight sequel to Frank Miller and Zack Snyder’s 300, as it can also be described as a prequel, sidequel, and probably some other words that have been invented to describe modern spin-off films that don’t pick up after the last film ended.  Rise of an Empire is meant to be like a glove to the first film, as it surrounds the original narrative with new material.  The results are a film that doesn’t totally work on its own terms, but does offer a delicious scene-stealing performance from Eva Green.  My 300: Rise of an Empire Blu-ray review follows after the jump. 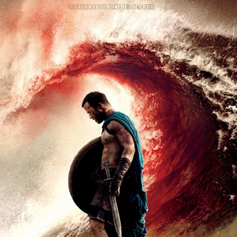 Though 300 was done with a lot of CG, it came before the boom of 3D, and so Rise of an Empire revels in the ability to show three dimensional blood.  These effects may have been cooler in a theater, but even in two dimensions it showcases that the film knows it’s an exploitation film.  And so there’s a lot of sword fights that generate geysers of blood.  It may not be as awesome as it was the first time Snyder did it, but it’s definitely visually arresting and exciting to watch, even if it does err close to being a cutscene.

But more than the set pieces, it’s nice to have something to hold on to, and where Sullivan Stapleton lacks the charisma and presence of Gerard Butler (or perhaps he’s just stuck in a role where the character’s more thoughtful approach to war is less engaging), the film delivers and then some with Artemisia.  Green, who made a striking debut in Bernardo Bertolucci’s The Dreamers a decade previous, has never found a great place in American movies, even if she was a great Bond girl in Casino Royale.  Perhaps she’s found a good home for herself in the recent television series Penny Dreadful, but she’s often been the best thing in very bad movies like Dark Shadows.  But here she gets one of her best roles and she nails the character’s strength and savagery while never feeling like it was a character that was gender swapped for diversity’s sake.  Perhaps the filmmakers realized this and let her dominate the movie because she is breathtaking every moment she’s on screen, and just as in control and powerful when she’s naked as when she’s wearing battle armor.  The scene where she invites her opponent over for possible casual sex is the film’s best battle sequence, and is easily the greatest scene in the movie.

Warner Brothers Blu-ray comes with a DVD and digital copy, with the film presented in widescreen (2.35:1) and in DTS-HD 7.1 Master Audio.  This is a demo disc, plain and simple, as the thunderous soundtrack makes the most of its defined channel separation, while the picture quality is immaculate.  The film was designed to be visually and aurally overwhelming and the Blu-ray presents that well.  Extras are limited to features.  There’s a four part behind the scenes titled “The 300 Effect” (30 min.) which covers the making of with interview with the cast and crew (including Zack Snyder), and talks about how the film came together, how it interweaved the story of the first film into the second, about the characters who returned from the first film for parts big and small, and to the look and feel of the movie.  It’s followed by “Real Leaders and Legends” (23 min.) which gets historians to give a historical context to the film, and then by “Women Warriors” (12 min.), which gives the films real stars their due, while “Savage Warships” (11 min.) puts focus on the film’s boats.  Rounding out the set is “Becoming a Warrior” (5 min.) which gets into the fitness regimen much of the cast had to follow.